Use the following video: https://www.youtube.com/watch?v=voOK-1DLr00 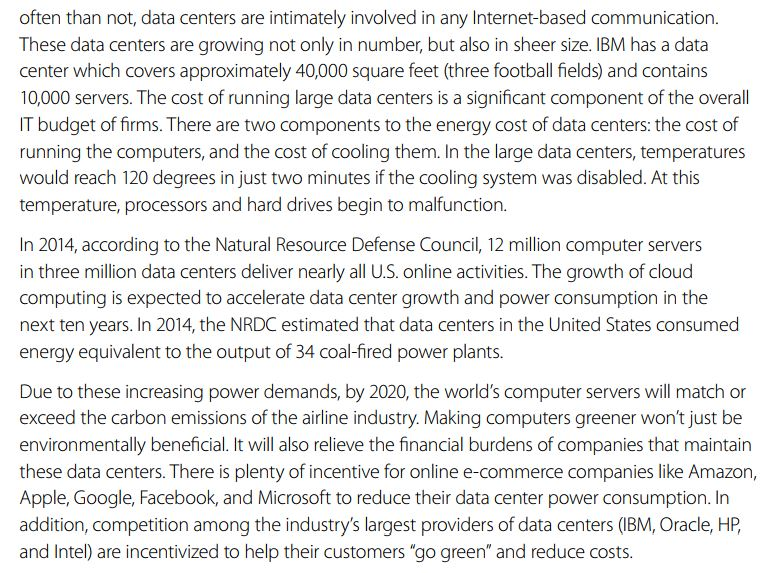 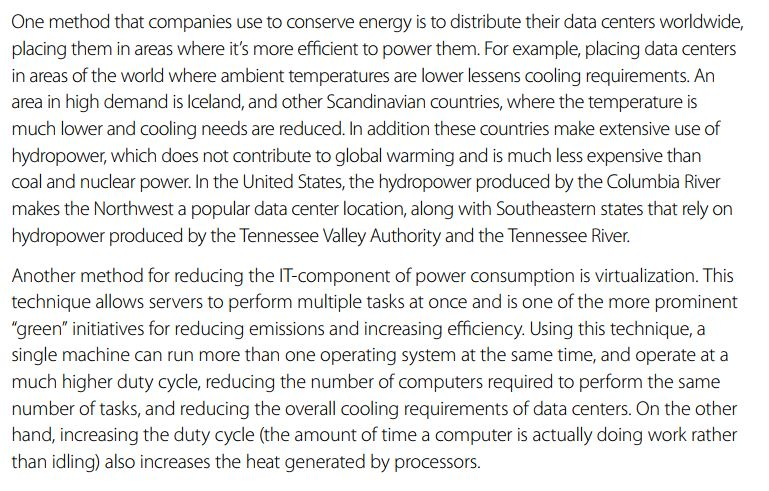 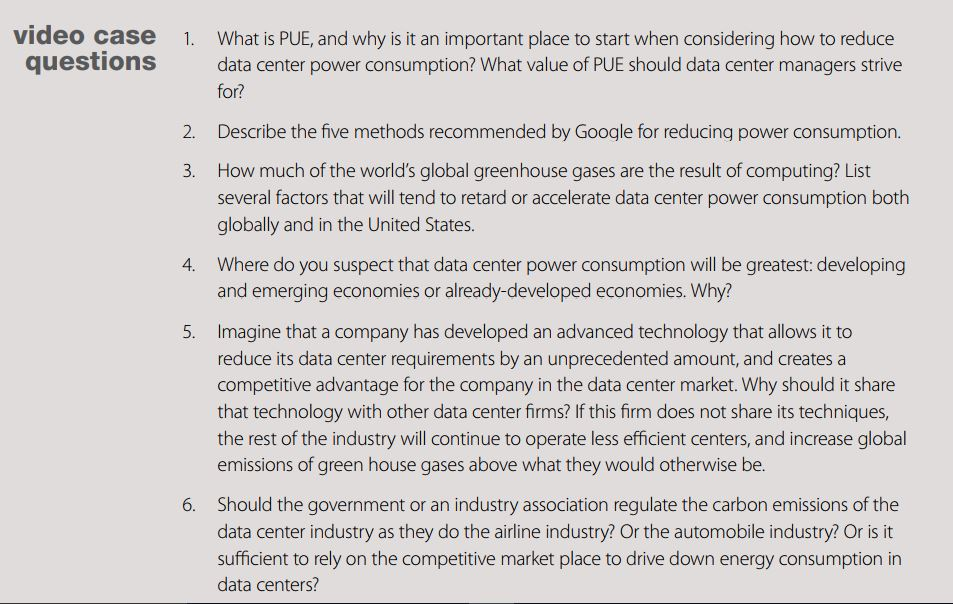 Consumers of technology constantly demand devices that are smaller, more efficient, and more powerful than the ones they have. But most consumers don’t understand the massive back-end infrastructure that powers their “front end” devices, like mobile phones, smartphones, tablets, and desktop computers, nor the impact that this infrastructure has on the environment. case Take, for example, smartphones and tablet computers. iPhones, Androids, BlackBerrys, iPads, and other tablets represent a trend in all forms of mobile technology towards smaller devices that perform an increasingly large number of functions. But every time a smartphone or tablet user connects to the Internet, places a call, or sends an instant message, it uses power not only on their phone, but at every step of the infrastructure used to perform that function. More

It is used to measure the how efficiently a computer data center uses its power.. PUE is determined by dividing the amount of power entering a data center by the power used to run the computer infrastructure within it.

– Taking a measurement of energy use at or near the facility’s utility meter.

– Measure the IT equipment load after power conversion, switching, and conditioning is completed.

There are many organizations who are looking for various ways for doing more with less, reducing IT budgets or perhaps curtailing the incidental costs associated with data center expansions. Now a days, data center managers must focus on creating efficient operating environments to augment the life of existing data centers.

e.g A PUE value of 2.0 means that for every watt used to power IT equipment, an additional watt is required to deliver the power and keep the equipment cool. There is increasing pressure being exerted on data center managers to take measures to reduce the PUE.

To monitor the energy efficiency in the data center,there are two primary metrics and they are PUE and DCE(Data centre efficiency). Both of them measures the same parameters and i.e the total power of the data center and the IT equipment power.

The formula for this is :

The value of PUE should be 1 which depicts the optimal level of data center efficiency. More than 1 value will be measured by the data center manager.

PUE of 1.0 is considered to be ideal.

e.g.Consider that the power entering the data center is 100 kW and the power consumed by the IT load is 50 kW; PUE will be calculated as follows:

A PUE value of 2 is typical for a data center. Which means for every watt required to power a server, two watts of power are consumed.

-Unplug your appliances when not in use.

-Insulate your roof or cealing

-Seal your chimney with a damper

– Close all external windows and doors

– Turn on the air conditioner early

Green power is available to all households and generally costs slightly more than standard electricity.

Or The 5 google techniques are –

Ans 3- The numbers are about 2% of global greenhouse gas emissions were mobile phones, computers and monitors.This 2% of data centers are responsible for 15% and 5% includes large Internet data centers.

Factors that accelerate as as follows:

Factors that reduce power consuptions are

Ans 4- The companies with the aim of reducing consumption, distributed data centers around the world, in developed countries already and want to locate in areas with low temperatures, cooling savings.They are located in developed countries such as Iceland, Norway, Sweden, using hydroelectric power and not coal ornuclear power.Also in the North American & EU data centers are located .

Ans 5- If Google shares with other technological companies, then the rest of the industry will also have centers more efficient and decrease global emmision of green house gases.

– Google is considered to be an industry leader in the data center efficiency.

-It builts its own custom data centers.

– Google takes many other steps to share its energy efficient best practices with other firms and the public.

Ans 6- A govt or an inductry association should regulate the carbon emissions of the data center industry as they do for other industries.

-Such an associations can make the companies aware about the importance of “going green” and there by reducing the emssions.

-The environmental protection agency , in 2007 projected that the power requirements of the data centers would double from 2005 to 2010.

– There are plenty of intiatives for online ecommerce companies to reduce their data center power consumptions.

– In addition, competition among the industry’s largest providers of data centers are incentivised to help their customers “go green” and reduce costs.