Blue Inc. reported income from continuing operations before taxes during 2017 of $790,900. Additional transactions occurring in 2017 but not considered in the $790,900 are as follows:

1. The corporation experienced an uninsured flood loss in the amount of $98,500 during the year.

4. When its president died, the corporation realized $159,800 from an insurance policy. The cash surrender value of this policy had been carried on the books as an investment in the amount of $43,910 (the gain is nontaxable).

5. The corporation disposed of its recreational division at a loss of $106,680 before taxes. Assume that this transaction meets the criteria for discontinued operations.

6. The corporation decided to change its method of inventory pricing from average-cost to the FIFO method. The effect of this change on prior years is to increase 2015 income by $57,320 and decrease 2016 income by $21,450 before taxes. The FIFO method has been used for 2017. The tax rate on these items is 40%.

Prepare an income statement for the year 2017 starting with income from continuing operations before taxes. Compute earnings per share as it should be shown on the face of the income statement. Common shares outstanding for the year are 128,280 shares. (Assume a tax rate of 30% on all items, unless indicated otherwise.) 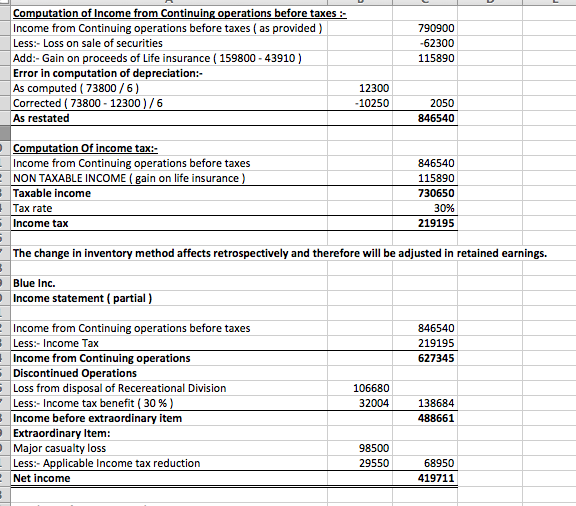