Answered Essay: Consider the following LAN where three hosts are connected to a router, which is then linked to a server. Explain ho 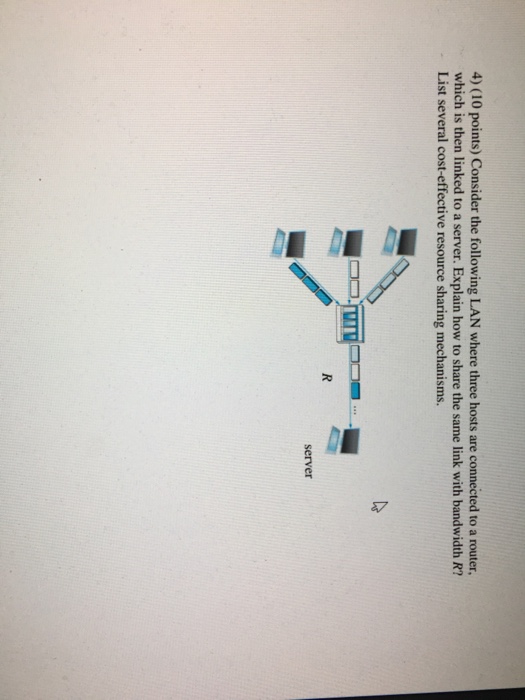 Consider the following LAN where three hosts are connected to a router, which is then linked to a server. Explain how to share the same link with bandwidth R List several cost-effective resource sharing mechanisms.

There are two situations where link bandwidth needs to be shared between different users. The first situation is when several hosts are attached to the same physical link. This situation mainly occurs in Local Area Networks (LAN). A LAN is a network that efficiently interconnects several hosts in the same room, building or campus. Any of these hosts needs to be able to exchange information with any of the other five hosts.

A network organized as a Bus

In a bus network, all hosts are attached to a shared medium, usually a cable through a single interface. When one host sends an electrical signal on the bus, the signal is received by all hosts attached to the bus. A drawback of bus-based networks is that if the bus is physically cut, then the network is split into two isolated networks. For this reason, bus-based networks are sometimes considered to be difficult to operate and maintain, especially when the cable is long and there are many places where it can break. Such a bus-based topology was used in early Ethernet networks.

A network organised as a Star

each host has a single physical interface connecting it to the ring. Any signal sent by a host on the ring will be received by all hosts attached to the ring. From a redundancy point of view, a single ring is not the best solution, as the signal only travels in one direction on the ring; thus if one of the links composing the ring is cut, the entire network fails. In practice, such rings have been used in local area networks, but are now often replaced by star-shaped networks. In metropolitan networks, rings are often used to interconnect multiple locations. In this case, two parallel links, composed of different cables, are often used for redundancy. With such a dual ring, when one ring fails all the traffic can be quickly switched to the other ring.

–> The common problem among Local Area Networks is how to efficiently share the available bandwidth. If two devices send a frame at the same time, the two electrical, optical or radio signals that correspond to these frames will appear at the same time on the transmission medium and a receiver will not be able to decode either frame. Such simultaneous transmissions are called collisions.

–> All Local Area Network technologies rely on a Medium Access Control algorithm to regulate the transmissions to either minimise or avoid collisions.