Answered Essay: Fraud Case 19-1 Jerry never imagined hed be sitting there in Washington being grilled mercilessly by a 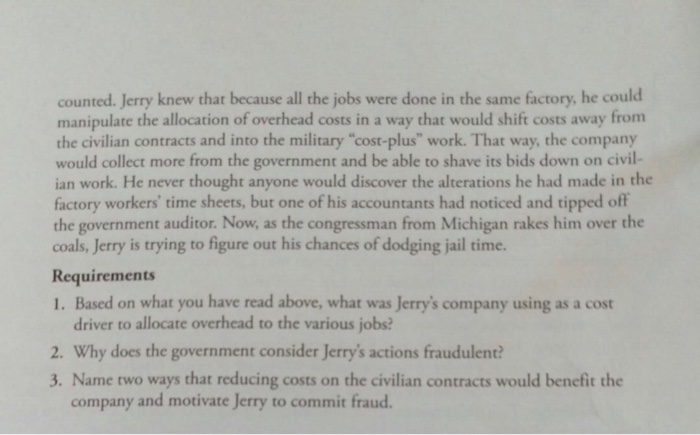 Fraud Case 19-1 Jerry never imagined hed be sitting there in Washington being grilled mercilessly by a panel of congressmen. But a young government auditor picked up on his scheme last year. His company produced high-tech navigation devices that were sold to both military and civilian clients. The military contracts were “cost-plus meaning that payments were calculated based on actual production costs plus a profit markup. The civilian contracts were bid out in a very competitive market, and every dollar

Cost driver is described as any factor that results in the change of the costs. As Jerry’s company knew that the military and civilian orders are made at the same factory, the activities that distinguish the civilian’s produce with that of the cost plus work could be interchangeably done, thereby reducing the overhead cost from the civilian’s production and charging it to the military’s cost plus work and earning more profits

It is certain that the work done by Jerry’s company is fraudulent as it is not ethical to gain from fraudulent way. A proper bifurcation of overheads to be used for military and civilian work should have been maintained so that there would have been no mix up. Here the company has made the mix up with an intention to earn more profits which is not in accord to the ethical business practice.

It is obvious that when the cost of overheads from the civilians’ production is shifted to be vouched against government, it would decrease the material cost which is one of the key ingredient of the profit. Where the actual cost for production for civilians’ product falls below the standard cost while keeping the selling price high in the competitive market, it is sure to earn handsome profits to the organization.