Answered Essay: Jane swift is becoming frustrated with her job as a shift leader a! Jones Department Store She's worked I 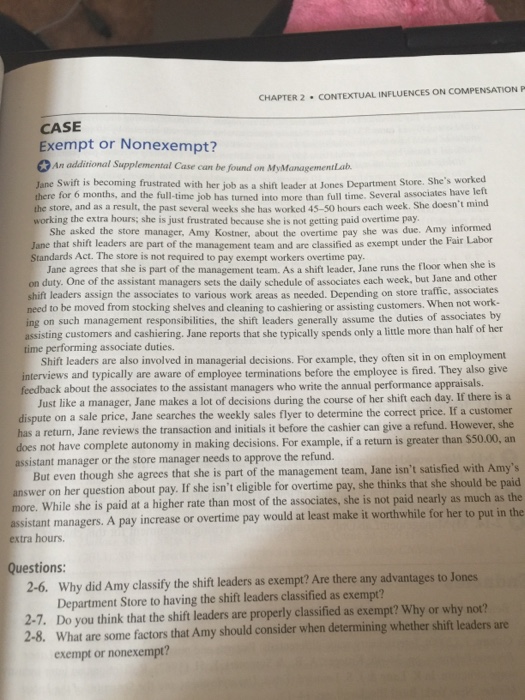 Jane swift is becoming frustrated with her job as a shift leader a! Jones Department Store She’s worked I Acre for 6 months. and the full time job has turned into more than full time Several associates have left I the store, and as a result, the past several weeks she has worked 45-50 hours each week She doesn’t mind working the extra hours; she is just frustrated because she is not getting paid overtime pay She asked the store Amy Costner. about the: overtime pay she was doe Amy informed; Jane that shift leaders are part of the management team and are classified as exempt under the Fair Labor Standards Act. The store in not required to pay exempt workers overtime pay. [Jane agrees that she is part of the management learn. As a shift leader. Jane tunes the floor when she is on duty. One of the assistant managers sets the daily schedule of associates each week, but Jane and other shift leaders assign the associates to various work areas as needed. Depending on store traffic. associates to be moved from stocking shelves and cleaning to cashiering or assisting customers. When not working on such management responsibilities, the shift leaders generally assume the duties of associates by assisting customers and cashiering. Jane reports that she typically spends only a little more than half of her dine performing associate duties. Shift leaders are also involved in managerial decisions. For example, they often sit in on employment interviews. and typically are aware of employee terminations before the employee is fired. They also give feedback about the associates to the assistant managers who write the annual performance appraisals. Just like a manager. Jane makes a lot of decisions during the course of her shift each day. If there is a dispute on a sale price. Jane searches the weekly sales flyer to determine the correct price. If a customer has a return. Jane reviews the transaction and initials it before the cashier can give a refund. However, she does not have complete autonomy in making decisions. For example, if a return is greater than $50.00. an i. assistant manager or the store manager needs to approve the refund But even though she agrees that she is part of the management team. Jane isn’t satisfied with Amy’s answer on her question about pay. If she isn’t eligible for overtime pay. she thinks that she should be paid while she is paid at a higher rate than most of the associates, she is not paid nearly as much as the assistant managers. A pay increase or overtime pay would at least make it worthwhile for her to put in the extra hours What did Amy classify the shift leaders as exempt? Are there any advantages to Jones Department Store., having (he shift leaders classified as exempt? Do you think that the shift leaders are properly classified as exempt? Why or why not? What are some factors that Amy should consider when determining whether shift leaders are Exempt or nonexempt?

2-6. Amy classified shift leaders as exempt from overtime since they are meant to spent most of their time managing others rather than performing duties of people they manager. The advantage to Jones Department Store in having shift leaders classified as exempt is that they can be made to do the work of associates without having to be paid overtime.

2-7. I feel they are not properly classified since more than half the time is being spent on associate duties rather than managerial duties.

2-8. The factors Amy should consider when determining whether shift leaders are exempt or not are: