Answered Essay: Q14. Social judgment theory suggests that    a. people can be best persuaded when their beliefs are

Q14. Social judgment theory suggests that
a. people can be best persuaded when their beliefs are changed in small increments over time.
b. people all submit to the rationalization process at one time or another.
c. an individual will never completely change his or her mind about something.
d. society is the group that determines whether something is considered good or bad.

Q16. Often, when a speaker attempts to change the feelings a person has about something, it is an attempt to change
a. attitudes.
b. values.
c. beliefs.
d. mindfulness.

Q17. The latitude of non-commitment relates to
a. the idea that no one ever commits to anything completely.
b. the area between the latitude of acceptance and rejection.
c. the area of belief where everything is intolerable.
d. the idea that a scale can be used to judge where people’s beliefs fall about any particular topic. 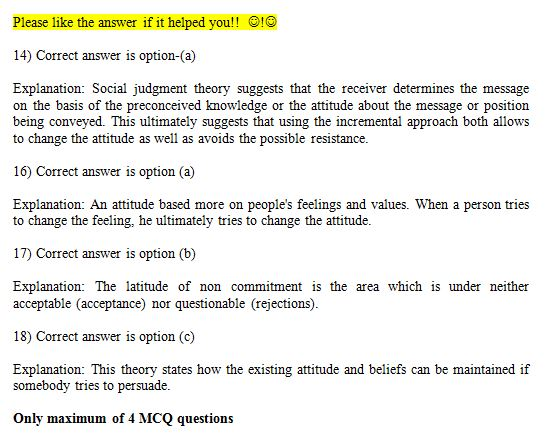