Answered Essay: The following are the balances in the accounts for Joan Miller Advertising Agency as of January 31, 2001:

The following are the balances in the accounts for Joan Miller Advertising Agency as of January 31, 2001:

During the month of February, the agency engaged in the following transactions:

Feb. 1 Received an additional investment of cash from Joan Miller, $6,000

Feb. 8 Completed the series of advertisements for Marsh Tire Company that began on January 31, and billed Marsh Tire Company for the total services performed, including the accrued revenues that had been recognized in January of $200 (see fees receivable). The total bill is $800.

Feb. 12 Paid the amount due to Morgan Equipment for the office equipment purchased last month $1,500

Feb. 13 Accepted an advance fee in cash for artwork to be done for another agency, $1,800.

Feb. 14 Purchased a copier from Morgan Equipment for $2,100 paying $250 in cash and agreeing to pay he rest in equal payments over the next five months.

Feb. 19 Paid amount due for the telephone bill that was received and recorded at the end of January , $70.

Feb. 27 Received the telephone bill for February, which is to be paid next month, $80.

Feb. 28 Paid out cash to Joan Miller as a withdrawal for personal living expenses, $1,400.

At the end of February, adjustments are made for the following:

a. One month’s prepaid rent has expired.
b. One month’s prepaid insurance has expired, $40.
c. An inventory of art supplies reveals $720 of supplies are still on hand on February 28th.
d. An inventory of office supplies reveals $300 in office supplies have been used in February.
e. Depreciation on the Art equipment for February is calculated to be $90.
f. Depreciation on the Office equipment for February is calculated to be $100.
g. Art services performed for which payment has been received in advance total, $1,400
h. Fees for advertising services performed will not be billed until March total $340.
i. Three days’ worth of secretarial wages had accrued by the end of February totaling $180. 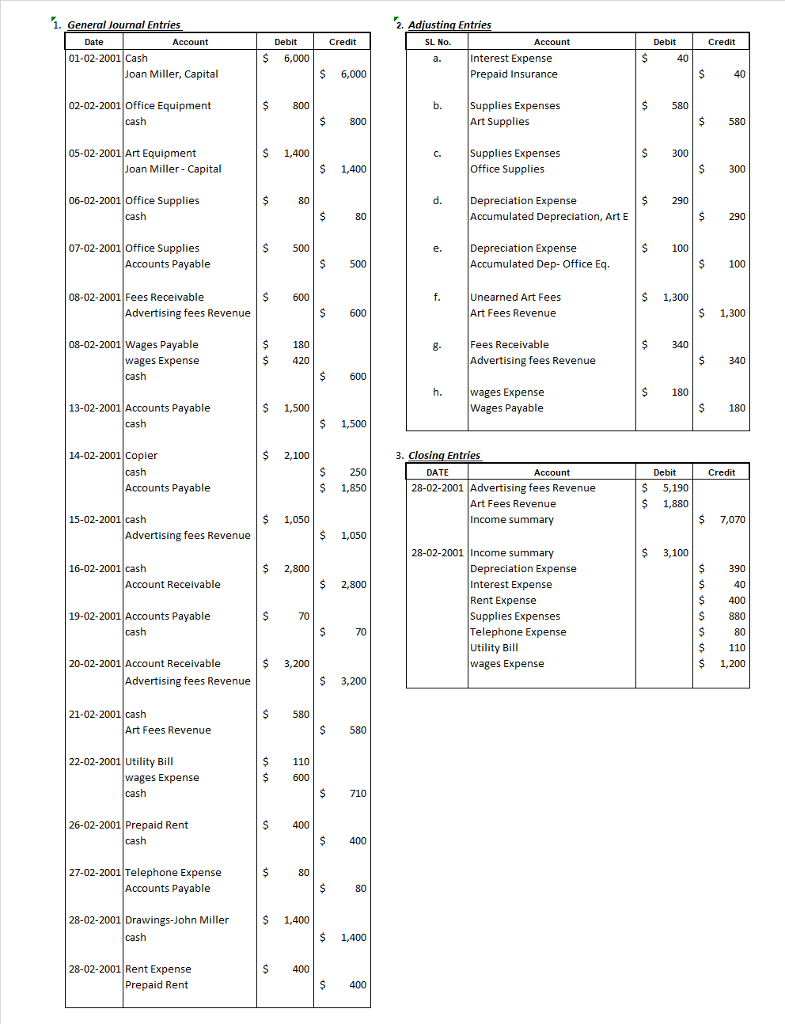