Answered Essay: The transactions completed by PS Music during June 2018 were described at the end of Chapter 1. The following trans 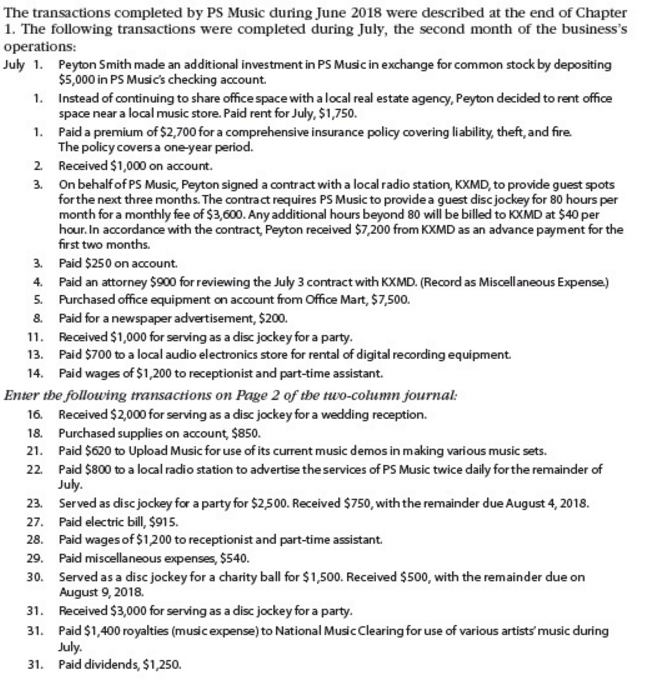 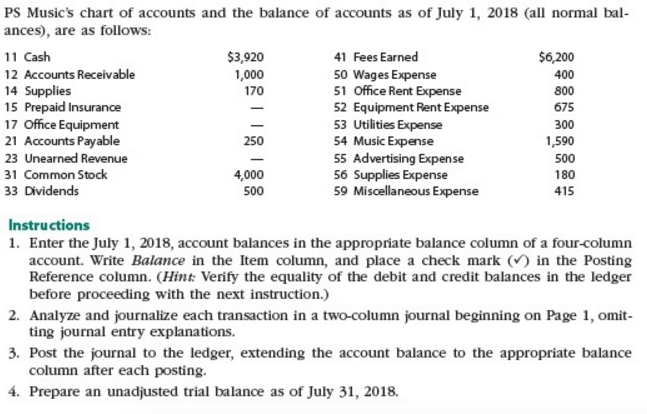 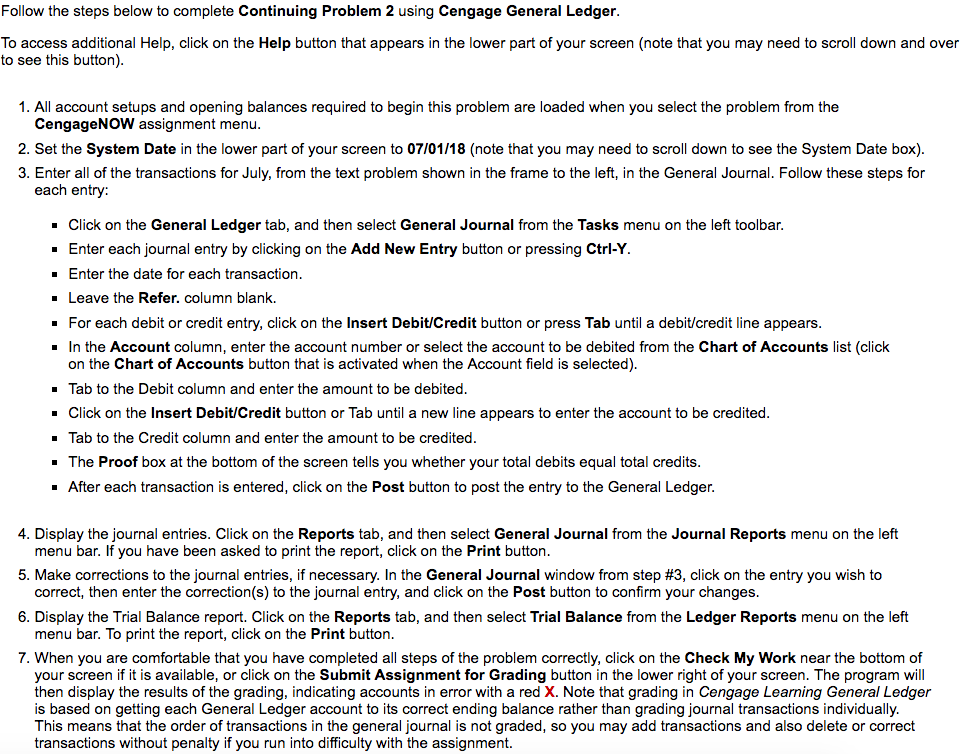 The transactions completed by PS Music during June 2018 were described at the end of Chapter 1. The following transactions were completed during July, the second month of the business’s Peyton Smith made an additional investment in PS Music in exchange for common stock by depositing $5,000 in PS Music’s checking account. Instead of continuing to share office space with a local real estate agency, Peyton space near a local music store. Paid rent for July, $1,750. Paid a premium of $2,700 for a comprehensive insurance policy covering liability, theft, and fire. The policy covers a one-year period. Received $1,000 on account. On behalf of PS Music, Peyton signed a contract with a local radio station, KXMD, to provide guest spots for the next three months. The contract requires PS Music to provide a guest disc jockey for 80 hours per month for a monthly fee of $3,600. Any additional hours beyond 80 will be billed to KXMD at $40 per hour. In accordance with the contract, Peyton received $7,200 from KXMD as an advance payment for the first two months. Paid $250 on account. Paid an attorney $900 for reviewing the July 3 contract with KXMD. (Record as Miscellaneous Expense) July 1. decided to rent office 1. 1. 2. 3. 3. 4. 5. Purchased office equipment on account from Office Mart, $7,500. 8. Paid for a newspaper advertisement, $200. 11 Received $1,000 for serving as a disc jockey for a party 13. Paid $700 to a local audio electronics store for rental of digital recording equipment 14. Paid wages of $1,200 to receptionist and part-time assistant. Enter the following transactions on Page 2 of the two-column journal 16. 18. 21. 22. Received $2,000 for serving as a disc jockey for a wedding reception. Purchased supplies on account, $850. Paid $620 to Upload Music for use of its current music demos in making various music sets. Paid $800 to a local radio station to advertise theservices of PS Music twice daily for the remainder of 23. Served as disc jockey for a party for $2,500. Received $750, with the remainder due August 4, 2018. 27. Paid electric bill, $915. 28. Paid wages of $1200 to receptionist and part-time assistant. 29. Paid miscellaneous expenses, $540. 30. Served as a disc jockey for a charity ball for $1,500. Received s500, with the remainder due on 31. 31. August 9, 2018. Received $3,000 for serving as a disc jockey for a party Paid $1,400 royalties (musicexpense)to National Music Clearing for use of various artists’ music during 31 Paid dividends, $1,250.