Answered Essay: Which access modifier is not allowed in a struct? Private Public Protected Internal All of the Abov 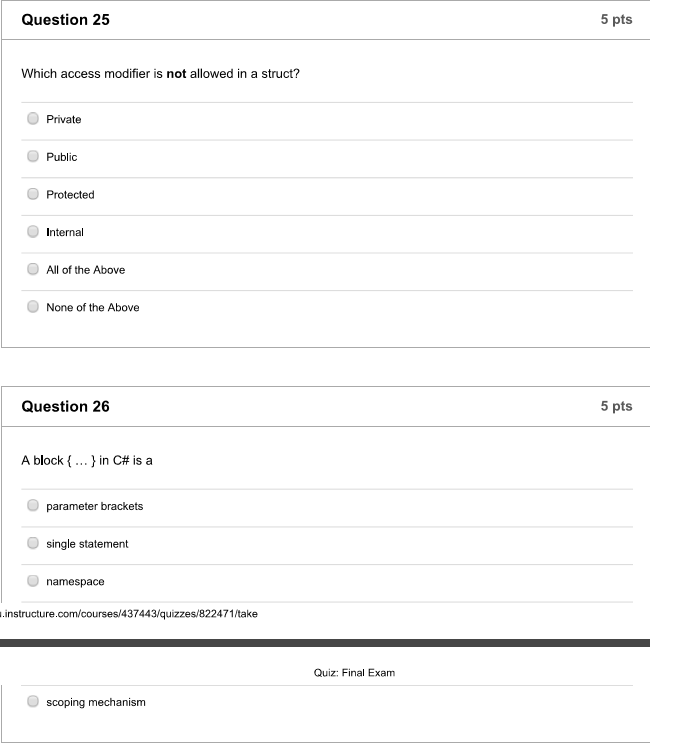 Which access modifier is not allowed in a struct? Private Public Protected Internal All of the Above None of the Above A block {…} in C# is a parameter brackets single statement namespace scoping mechanism

public
The type or member can be accessed by any other code in the same assembly or another assembly that references it.

private
The type or member can be accessed only by code in the same class or struct.

protected
The type or member can be accessed only by code in the same class or struct, or in a class that is derived from that class.

internal
The type or member can be accessed by any code in the same assembly, but not from another assembly.

protected internal
The type or member can be accessed by any code in the assembly in which it is declared, or from within a derived class in another assembly. Access from another assembly must take place within a class declaration that derives from the class in which the protected internal element is declared, and it must take place through an instance of the derived class type.1

–Classes and structs that are declared directly within a namespace (in other words, that are not nested within other classes or structs) can be either public or internal. Internal is the default if no access modifier is specified.

–Derived classes cannot have greater accessibility than their base types. In other words, you cannot have a public class B that derives from an internal class A. If this were allowed, it would have the effect of making A public, because all protected or internal members of A are accessible from the derived class.

–You can enable specific other assemblies to access your internal types by using the InternalsVisibleToAttribute.

–Class members (including nested classes and structs) can be declared with any of the five types of access. Struct members cannot be declared as protected because structs do not support inheritance.

–Normally, the accessibility of a member is not greater than the accessibility of the type that contains it. However, a public member of an internal class might be accessible from outside the assembly if the member implements interface methods or overrides virtual methods that are defined in a public base class.

–User-defined operators must always be declared as public.

–To set the access level for a class or struct member, add the appropriate keyword to the member declaration, as shown in the following example.

Since Structers do not support Inheritance,Structure Members cannot be specified as Protected

A namespace definition begins with the keyword namespace followed by the namespace name as follows:

The following program demonstrates use of namespaces:

When the above code is compiled and executed, it produces the following result:

2) A more formal definition is that scope is an enclosing context or region that defines where a name can be used without qualification.

In C#, both scope and declaration space is defined by a statement block enclosed by braces. That means namespaces, classes, methods, and properties all define both a scope and a declaration space. As a result, scopes can be nested and overlap each other.

If scope defines the visibility of a name and scopes are allowed to overlap, any name defined in an outer scope is visible to an inner scope, but not the other way around.

In the code shown in Listing 3.1, the field age is in scope throughout the entire body of Contact, including within the body of F and G. In F, the use of age refers to the field named age.

However, in G, the scopes overlap because there is also a local variable named age that is in scope throughout the body of G. Within the scope of G, when you refer to age, you are actually referring to the locally scoped entity named age and not the one in the outer scope. When this happens, the name declared in the outer scope is hidden by the inner scope.

Figure shows the same code with the scope boundaries indicated by the dotted and dashed rectangles.

4) A statement can consist of a single line of code that ends in a semicolon, or a series of single-line statements in a block. A statement block is enclosed in {} brackets and can contain nested blocks.