Esquire Comic Book Company had income before tax of $1,550,000 in 2018 before considering the following material items

Esquire Comic Book Company had income before tax of $1,550,000 in 2018 before considering the following material items:
Esquire sold one of its operating divisions, which qualified as a separate component according to generally accepted accounting principles. The before-tax loss on disposal was $405,000. The division generated before-tax income from operations from the beginning of the year through disposal of $610,000. Neither the loss on disposal nor the operating income is included in the $1,550,000 before-tax income the company generated from its other divisions.

The company incurred restructuring costs of $60,000 during the year.

Required:
Prepare a 2018 income statement for Esquire beginning with income from continuing operations. Assume an income tax rate of 40%. Ignore EPS disclosures. (Amounts to be deducted should be indicated with a minus sign.) 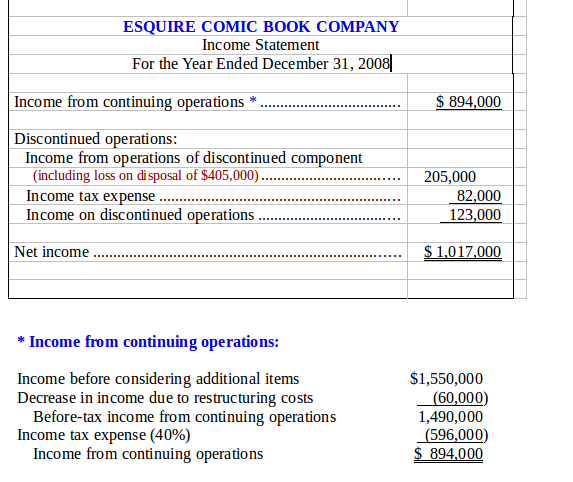