Project Management Analytics Exercise This is an example of a construction project. The construction

This is an example of a construction project. The construction for a large corporate building must be started by February 19th and completed by the end of the year. The legal contract for the project includes a penalty of $10,000 for every week of delay beyond December 31st. This implies 315 days or 45 weeks for the expected project duration assuming a seven-day work schedule and no holidays in between!

The details of the project activities are as follows –

The project begins with clearing the site, an activity that takes eight weeks. Once the site is cleared, laying of the subsurface drainage takes another eight weeks, followed by filling of the earth which takes 14 weeks. Only after this activity is completed can installation of the artificial turf outside of the building can start – the task then takes 12 weeks. Simultaneously, the work on the building can also start once the site is cleared.

The work on the building starts first by excavating and then by pouring of the concrete basement. Each of these activities takes 4 weeks to complete. Next comes the construction of the walls (12 weeks), followed by constructing the roof (13 weeks). The interiors are then completed (5 weeks) followed by internal painting (4 weeks). However, painting cannot be started until electrical work is completed (4 weeks). The electrical work cannot be started until the outside power lines are laid (8 weeks), which needs an additional activity of getting the permits before it can be started. The permit takes 4 weeks. Assume that you would start on the permits after the excavation activity for the building begins.

Once the roof of the building is erected, work can start simultaneously on the outside lighting (5 weeks), and on the signage and other external landscaping (4 weeks). For simplicity, assume you start the project on February 19th and you follow a 7-day work schedule where each week of an activity’s duration takes 7 days.

1.When do you complete the project?

2.How much penalty would you incur based on the estimated completion time?

3. You have a few proposals to expedite the completion of the project. Analyze each proposal independently of the other proposals and comment on which proposal (if any) would you adopt for expediting the project?

a.Expedite the wall construction activity – this would cost $20000 and would reduce the activity by six weeks

b.The same as the above proposal but in addition, use a double shift on filling the earth. This would cost $10,000 and would reduce the filling activity by 5 weeks.

c.Construction of the roof is important. You could use additional labor for $9000 and cut six weeks off the original duration of the activity.

4,How would your analysis on the above change if the company factors in the possibility of a worker strike in the month of December?

List all the activities, their duration and their Immediate predecessor activities (IPA) 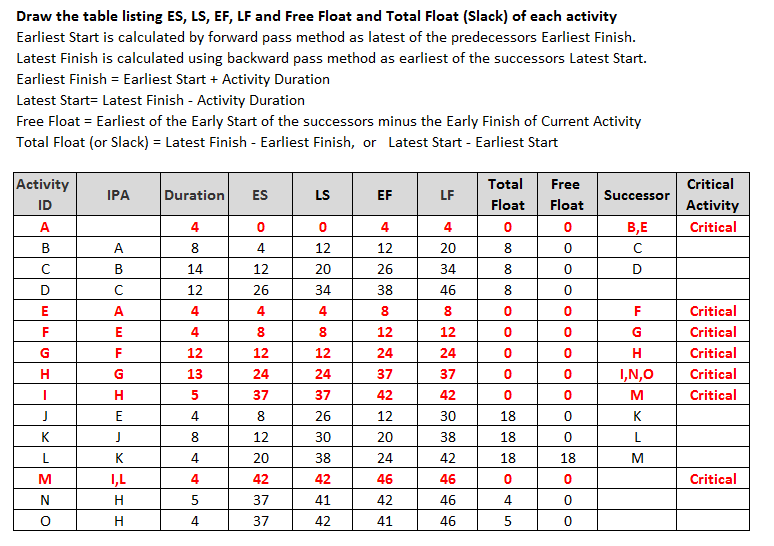 1) In the above table, we see that the project completion will take 46 weeks. So we expect the project to complete by 7-Jan