Why has the global capital market grown so rapidly in recent decades? Do you think this growth will continue 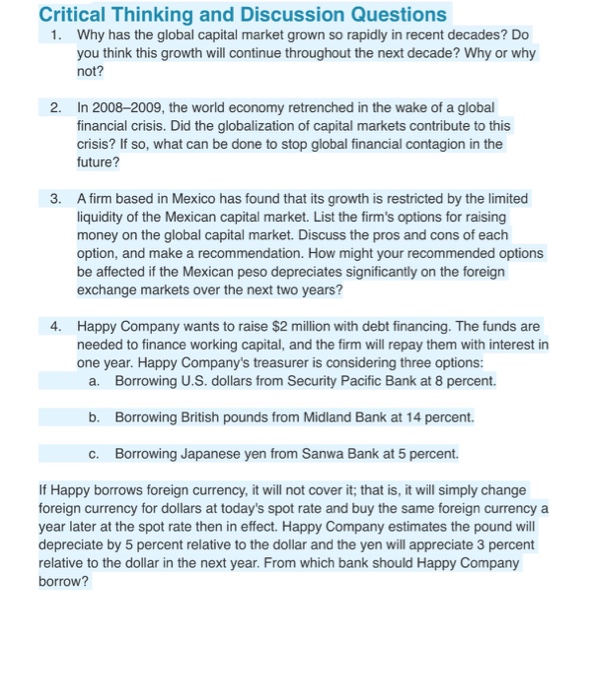 Why has the global capital market grown so rapidly in recent decades? Do you think this growth will continue throughout the next decade? Why or why not? In 2008-2009, the world economy retrenched in the wake of a global financial crisis. Did the globalization of capital markets contribute to this crisis? If so, what can be done to stop global financial contagion in the future? A firm based in Mexico has found that its growth is restricted by the limited liquidity of the Mexican capital market. List the firm’s options for raising money on the global capital market. Discuss the pros and cons of each option, and make a recommendation. How might your recommended options be affected if the Mexican peso depreciates significantly on the foreign exchange markets over the next two years? Happy Company wants to raise $2 million with debt financing. The funds are needed to finance working capital, and the firm will repay them with interest in one year. Happy Company’s treasurer is considering three options: Borrowing U.S. dollars from Security Pacific Bank at 8 percent. Borrowing British pounds from Midland Bank at 14 percent. Borrowing Japanese yen from Sanwa Bank at 5 percent. If Happy borrows foreign currency, it will not cover it;that is, it w simply change foreign currency for dollars at today’s spot rate and buy the same foreign currency a year later at the spot rate then in effect. Happy Company estimates the pound will depreciate by 5 percent relative to the dollar and the yen will appreciate 3 percent relative to the dollar in the next year. From which bank should Happy Company borrow?

The global capital market has grown rapidly in recent decades. It has happened due to many reasons. The first reason the opening up of the economies and speeding up of the globalization. It has the double advantage of the capital market development. Liberalization as a part of the economy led to the development new forms of capital and portfolio investment in the economy. It caused to the huge inflows of foreign institutional investments in the capital market. It fueled the growth and capital market grew rapidly. Globalization further contributed to this growth. As a part of globalization, trade barriers came down and investments grew. Flow of capital also took place at relatively faster pace. As a result, capital market grew.
The second reason is the development of economies as a new avenue of growth and capital appreciation. Developed economies got saturated and efficient. Thus, investors from these countries went to new and developing economics where the interest rates were high and growth was about to take place.
The third reason is the channelization of funds among the domestic players. Capital market also presents opportunity for domestic players also as well as the households. It also contributed to the capital market growth as they also wanted to create wealth.
So, above are some of the most prominent reasons, that led to the capital market growth in recent decades.

The growth in capital market will continue, but with a lower growth rate. It will happen due to the following reasons:
1.   BRICS economies still pose a good prospect of capital appreciation with investment in the capital market. So, investors will continue to move in these countries, though with caution.
2.   Caution will take place because of global economic uncertainties. Examples are Mr. Trump’s America first policy and excessive focus on the internal growth, BREXIT issue in Europe, Two paced growth of European union.
3.   Falling prices of crude oil show that he economic growth is slowing down and moves with the settled pace.

Pl repost other unanswered questions for their proper answers!